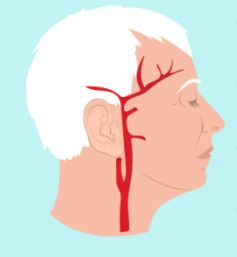 This project supports a physician-led working-group of clinical stakeholders to come together formulate an optimal, evidence-based patient care pathway for patients with suspected Giant Cell Arteritis (GCA). The timing and criteria for referral and confirmatory testing here locally on Vancouver Island is highly variable and unclear. In short, the current care pathway is very haphazard or ‘add-hoc’; and this often leads to patient frustration, clinical confusion, unfortunate therapy delays and ultimately avoidable morbidity.

The project specifically aims to clarify:
To clarify the following:
– what is the current state of care for these patients with presumptive/ suspected GCA.
– which patients with suspected/presumed GCA should be referred for targeted temporal color doppler ultrasonography versus temporal artery biopsy versus those patients who require both confirmatory tests.
– what is the optimal timing between presumptive diagnosis, initiation of therapy, and the completion of confirmatory tests.
– what is the optimal patient care pathway (i.e. who can make which referrals, and what follow-up is necessary or expected)?
– are are the current barriers that exist for patients in achieving optimal timing of therapy, confirmatory tests, and follow-up.